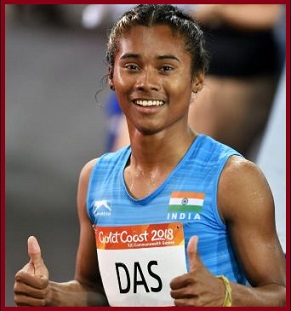 Sprinter Hima Das (18 years old) who hails from Assam has won three medals, including gold in 4x400m women's relay at the Asian Games and a historic gold medal at the U-20 World Championship in Finland.

Hima Das as a Youth Ambassador will be working towards raising awareness about the rights and needs of children. She will help support the voices of children and young people as active participants in decision making, thus contributing to their holistic development.

Hima Das nicknamed the 'Dhing Express', she was among the 20 sportspersons to be recommended for the Arjuna Award.

Hima Das is the first Indian woman to win a gold medal at any athletics meet at the world level.

Hima Das in July 2018, became the first Indian woman athlete to win a gold medal in the women's 400m final race at the IAAF World Under-20 Athletics Championships in Tampere, Finland.

With the win at IAAF World Under-20 Athletics Championship, Das became the first Indian woman, be it junior or senior, to win a gold medal at any level in a World Championship.