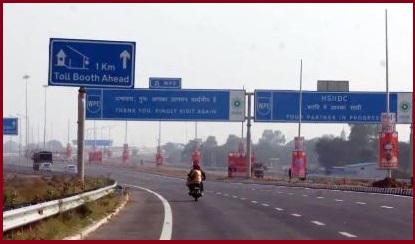 The Western Peripheral Expressway (WPE) which was earlier slated for inauguration in March 2018 was delayed due to carpeting work near drains and intersection. Its construction proposal was made in 2003 and took 15 long years to complete.

This expressway (135.6 KM long) once open, heavy vehicles will get access to various industrial towns like Manesar, Sohna, Dharuhera, Bawal and Bhiwadi in Haryana without entering Delhi.

The WPH crosses NH-44 at Kundli, NH-10 at Bahadurgarh, NH-8 at Manesar, NH-248 A at Sohna and NH-2 at Palwal. Almost 15 flyovers will be built at different places along the stretch to facilitate smooth commute.

The expressway will cut down the distance between various northern and western states, along with cutting down carbon emissions in the in Delhi & NCR region.

PM Modi inaugurated the Eastern  Peripheral Expressway on 27th May 2018 earlier,  fifteen years from the date of the announcement. The highway was completed in the record time of 17 months as the foundation stone was laid by PM Modi in November 2015.