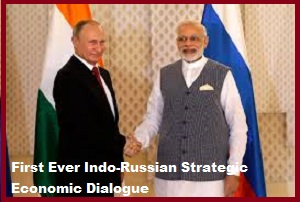 The two-day forum provided participants platform to discuss the development of bilateral ties in trade, investment, technology, and industry. It was aimed at bringing together key business figures from both countries.

Transport, agriculture and agro-processing, Small and Medium Enterprises (SMEs), digital transformation and frontier technologies and industrial cooperation were some of the key areas of focus of the forum.

Indo-Russian Strategic Economic Dialogue was created by PM Narendra Modi and President Vladimir Putin in their informal summit (held at Sochi in May 2018) to give a big push to an economic partnership between both countries that has started to gain momentum since 2017.

Indo-Russian Strategic Economic Dialogue aims to focus on the macro picture of economic partnership and also explore partnership and joint ventures in services and IT sectors. It seeks to put in place mechanism for partnership between resource-rich Russian regions and Indian states.

In the effort to boost bilateral trade to $30 billion by 2025, both countries have agreed to give high priority to the removal of obstacles to trade in order to improve upon 21.5% growth in two-way trade recorded last year. India has already launched Strategic Economic Dialogue with China.