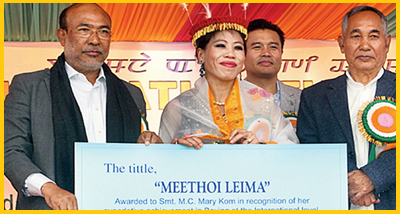 The Manipur government conferred the title ‘Meethoileima’ in recognition of her unprecedented feat of winning the sixth gold medal in the recently concluded World Boxing Championship and her illustrious career in the field.

Manipur's Chief Minister N Biren Singh on the occasion granted over a cheque worth Rs 10 lakh to the world-renowned boxer, Mary Kom.

MC Mary Kom was adorned with attires particularly worn by a queen of Manipur as a mark of ‘highest woman’ of the state while conferring the title.

All the members in the Rajya Sabha also congratulated their colleague and boxer M C Mary Kom for clinching gold in the Women’s World Boxing Championship held Nov 2018, in New Delhi