Awards, Honour » Government Of India » Ministry Of Labour And Employment 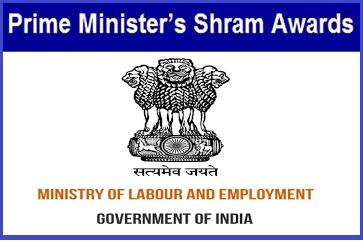 The Government of India has announced to confer the Prime Minister’s Shram Awards 2017 to 40 workers across India.

These awardees have been selected among the workers of Departmental Undertakings & Central and State Government PSUs and Private Sector companies having 500 or more workers.

This year, Prime Minister Shram Awards 2017 are conferred to 23 awardees are from the public sector and 17 awardees from the private sector.

1. Shram Ratna: No one selected this year.

3. Shram Vir/Shram Veerangana: Twelve nominations were selected under this category.

The Prime Minister’s Shram Awards were instituted in 1985 by the Government of India.

The Prime Minister Shram Awards seeks to recognise the distinguished performances and innovative abilities shown by the workers. Also, these awards honor their outstanding contribution in the field of productivity and exhibition of exceptional courage and presence of mind.

There are four types of Shram awards:

1. Shram Ratna: 2 Lakhs and recognition of their contribution to their field (Sanad).

» Madhavi Divan is the new Additional Solicitor General of India