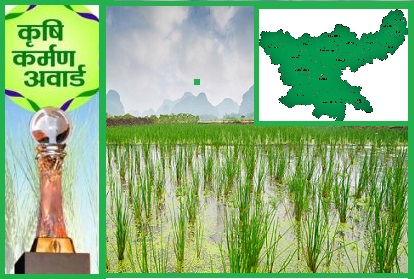 Jharkhand has been selected for "Krishi Karman" award in the rice category from the Union Ministry of Agriculture. The award will be given away in February 2019.

The Krishi Karman awards carry a cash prize worth Rs 2 crore and a citation. It is being given as a gesture of appreciation to the farmers of the state for achieving the milestone.

Under it, two progressive farmers, one male and one female, would also be given 'Agriculture Minister's Krishi Karman Award.

Each farmer would be given a cash award worth Rs 2 lakh along with a citation.

Krishi Karman awards were instituted in 2010-11 for recognising the meritorious efforts of the states in foodgrains production.

Jharkhand Government to give free mobile phones to 28 lakh f...

» Jharkhand Government to give free mobile phones to 28 lakh farmers