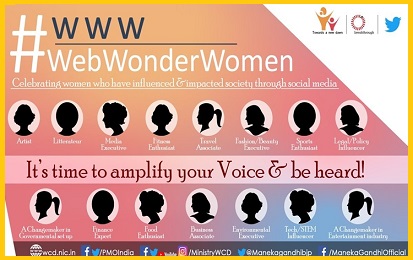 Union Ministry of Women and Child Development, Government of India has launched an online campaign Web- Wonder Women to discover and celebrate the exceptional achievements of women, who have been driving positive agenda of social change via social media.

Through the campaign, the Ministry aims to recognize the fortitude of Indian women stalwarts from across the globe who have used the power of social media to run positive & niche campaigns to steer a change in society.

The Web-Wonder Women Campaign is aimed at encouraging, recognizing and acknowledging the efforts of these meritorious Women.

The Web-Wonder Women Campaign has been launched by the Ministry of Women and Child Development, Government of India in association with the NGO Breakthrough and Twitter India.

Based on the nominations received from a large number of categories including Health, Media, Literature, Art, Sports, Environmental protection, fashion, the entries would be shortlisted. Then the shortlisted entries will be open for public voting on Twitter. The finalists would then be selected by the panel of judges.

Breakthrough NGO is a global human rights organization working to end violence against women and girls. Some of the well-known programmes of the NGO are Bell Bajao! (Ring the Bell!), Nation Against Early Marriage, Deport The Statue, #ImHere.

WCD Ministry issued an advisory on the dangerous online inte...

Union Ministry of Women and Child Development ‘Women i...

Ministry of Women and Child Development Signed MoU with Gove...