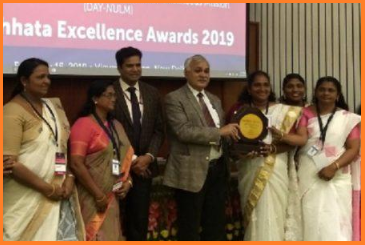 The Swachhata Excellence Awards 2019 were presented in the Shehri Samriddhi Utsav which was organized by the Ministry of Housing and Urban Affairs (MoHUA) from 1st – 15th February 2019.

The Raigarh Municipal Corporation of Chhattisgarh has won the “Swachhata Excellence awards 2019”.

The municipal corporations of Ambikapur of Chhattisgarh and Kumbakonam of Tamil Nadu have won the second and third prizes respectively. All of these are AMRUT cities.

A total of 40 awards were distributed to the Area Level Federations (ALFs), City Livelihoods Federations (CLFs) and Urban Local Bodies (ULBs). These Awards were given by the Ministry of Housing and Urban Affairs (MoHUA) as part of the Shehri Samriddhi Utsav.

Swachhata Excellence Awards were instituted by Ministry of Housing & Urban Affairs (MoHUA) in 2017, to encourage Area Level Federations (ALFs) of SHGs formed under DAY-NULM, for their initiatives to make their communities Swachh and help their cities achieve the outcomes of Swachha Bharat Mission – Urban (SBM-U).

The City Swachhata Livelihoods Awards for Urban Local Bodies (ULBs) was introduced this year for the ULBs for creating an enabling environment for dignified livelihoods in the sanitation sector.