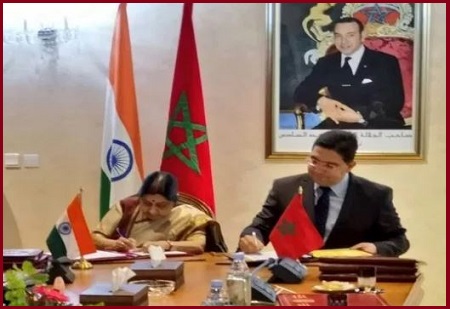 The MoUs include setting up of Joint Working Group on Counter Terrorism, Cooperation in Housing and Human Settlement, Reciprocal facilitation of procedures for issue of Business Visa and Cooperation in Youth Matters.

Sushma Swaraj and her Moroccan counterpart discussed ways to enhance bilateral cooperation in a number of areas, including defence and security, counter-terrorism and trade and investment.

Sushma Swaraj reached Rabat on her maiden visit to Morocco from Bulgaria yesterday. She is on a four-day three-nation tour to Bulgaria, Morocco, and Spain as part of India's efforts to strengthen ties with these countries and expand avenues of cooperation.

» India & Morocco for cooperation in the peaceful uses of outer space Details, Features