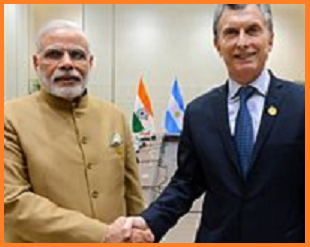 The visit of Argentine President Mauricio Macri also marks 70 years of the establishment of diplomatic relations between New Delhi and Buenos Aires.

Six MoUs were signed between the two sides are:

1. An Agreement was signed for the establishment of India-Argentina Centre of Excellence for Information and Technology.