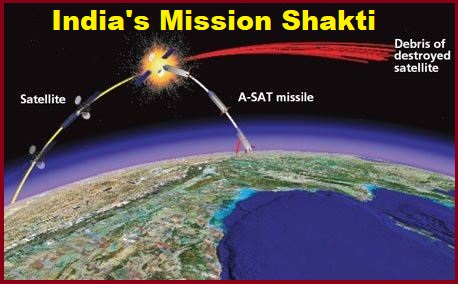 India has successfully test-fired an Anti-Satellite (A-SAT) missile by destroying a live satellite in the Low Earth Orbit.

The project named as Mission Shakti was led by the Defence Research and Development Organisation (DRDO) and ISRO. It was aimed at strengthening India’s overall security.

India is only the fourth country after the U.S., Russia, and China to have the A-SAT technology.

The DRDO’s “Mission Shakti” is to defend India’s space assets and not to start an arms race in space.

The indigenous development of the A-SAT technology will have many spin-offs that India can exploit for civilian commercial use.

The test was carried out from the Dr. A.P.J Abdul Kalam Island launch complex off the coast of Odisha by the DRDO.

Since the test was done in the lower atmosphere, whatever debris that is generated will decay and fall back onto the earth within weeks.

Mission Shakti does not violate the 1967 Outer Space Treaty of which India is a signatory. The treaty prohibits only weapons of mass destruction in outer space, not ordinary weapons.

The ASAT test was an added advantage of the capability achieved through the anti-satellite missile test provides credible deterrence against threats to our growing space-based assets from long-range missiles and proliferation in the types and numbers of missiles.