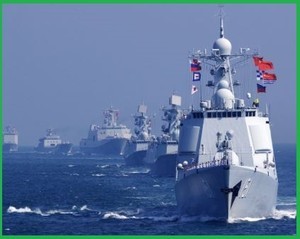 The warships from the United States, France, Japan, and Australia conducted their first-ever combined naval exercise in Asia on 16th May 2019.

The US and its allies in the Bay of Bengal come as the trade war picks up the pace between the United States and China. The move could be aimed at undermining China’s growing power in the region.

The two naval ships were joined by four other naval vessels including a helicopter carrier from Japan and a submarine from Australia.

The Japanese helicopter carrier, Izumo and the US destroyer,  had joined vessels from India and the Philippines last week for exercises in the South China Sea, most of which is claimed by China.

China claims almost all of the strategic South China Sea with Brunei, Indonesia, Malaysia, the Philippines, Taiwan and Vietnam pushing competing for claims to parts of it.

The United States, Japan, France, and Australia do not have any territorial claims there.