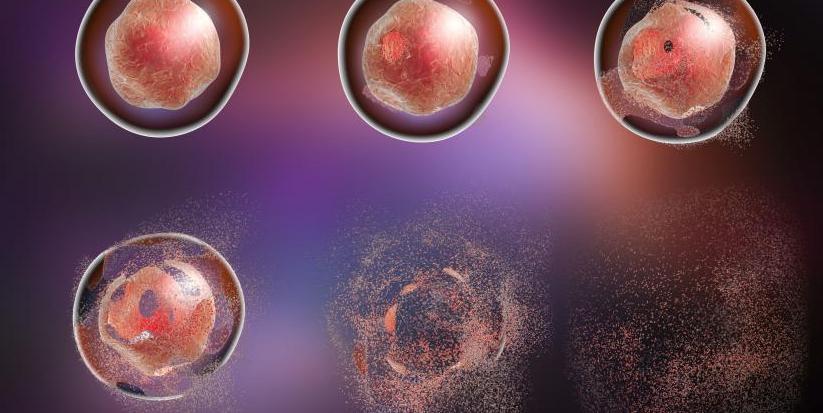 Apoptosis: A form of cell death in which a programmed series of events leads to the removal of cells without releasing harmful things into the neighboring area. Apoptosis plays a crucial role in developing and maintaining the health of the body by eliminating old cells, unnecessary cells, and unhealthy cells.

There are two ways that a cell can die necrosis and apoptosis. Necrosis occurs when a cell is damaged by an external force, such as poison, a bodily injury, an infection or getting cut off from the blood supply.

Apoptosis, on the other hand, is relatively civil, even though it may not sound so at first it's when a cell commits suicide. How is that better than necrosis? For one thing, the cleanup is much easier. It's sometimes referred to as programmed cell death, and indeed, the process of apoptosis follows a controlled, predictable routine.

When apoptosis does not work correctly, cells that should be eliminated may persist and become immortal,
for example, in cancer and leukemia. When apoptosis works overly well, it kills too many cells and inflicts grave tissue damage. This is the case in strokes and neurodegenerative disorders such as Alzheimer's, Huntington's, and Parkinson's diseases. Also known as programmed cell death and cell suicide.

Differences and similarities between plant and animal cells,...