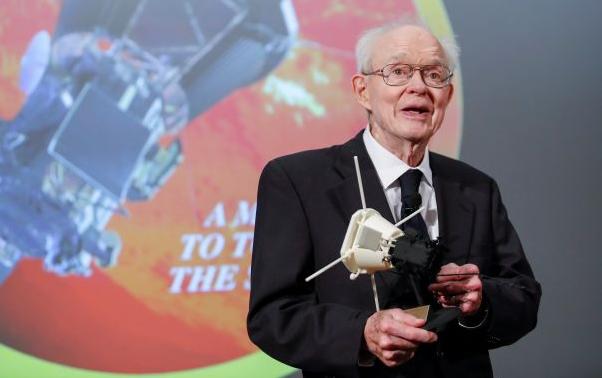 Eugene Newman Parker born June 10, 1927, is an American solar astrophysicist who—in the mid-1950s—developed the theory of the supersonic solar wind and predicted the Parker Spiral shape of the solar magnetic field in the outer solar system.

Parker became interested in physics while taking a course in it in high school in Royal Oak, Michigan. A tuition scholarship lured him to Michigan State University where he graduated in 1948 with a B.S. in physics. Next, he studied at the California Institute of Technology, obtaining his Ph.D. in physics in June 1951.

Throughout his career, Parker has investigated a variety of problems, mostly in the dynamics of magnetized fluids and collisionless plasmas. He discovered the fundamental role of cyclonic turbulence in the generation of magnetic fields, in the context of Earth and the Sun. He established the transonic solutions, representing the solar corona and solar wind and the heliosphere.

He established the powerful, dynamical role of cosmic rays in the magnetic field of the galaxy. He proved the theorem that, in an infinitely conducting fluid, the equilibrium of an interlaced magnetic field line topology contains internal tangential discontinuities (current sheets), suggesting it is nanoflares that heat the solar X-ray emitting filaments.

Eugene Parker got a National Medal of Science (1989), Gold medal of the Royal Astronomical Society in 1992.

In 2017, NASA renamed its Solar Probe Plus to Parker Solar Probe after Parker, and according to a NASA official, this was the first time that a space vessel was named after a living person. Parker was present at its August 12, 2018 launch.

Medal for Exceptional Achievement in Research (2018) of the American Physical Society. Citation: "For fundamental contributions to space physics, plasma physics, solar physics, and astrophysics for over 60 years.