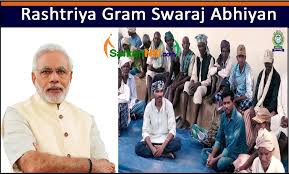 The Union Government governed by PM Narendra Modi has launched “Gram Swaraj Abhiyan- Special Interventions”, on the occasion of Ambedkar Jayanti on14th April 2018. It was launched under the name of “Sabka Sath, Sabka Gaon, Sabka Vikas”.

The Gram Swaraj Abhiyan was initiated on the guidelines of rural development schemes like Antyodaya based on principle of convergence and saturation.

The Gram Swaraj Abhiyan initiative aims for 100% coverage of seven schemes launched by Central Government for eligible beneficiaries in the three-week window from 14th April to May 5, 2018.

Under the Gram Swaraj Abhiyan, Central Government has appointed several directors and deputy secretaries to push its flagship programmes to “100% saturation” in rural areas.