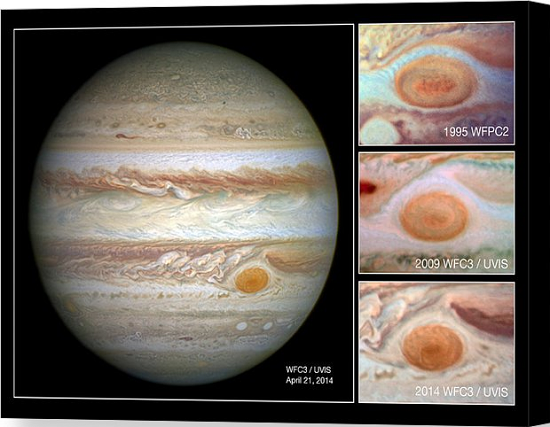 The Great Red Spot is a great high-pressure storm much like a hurricane on Earth, but it is enormous - estimated to be at least three times as large as the Earth.

It is anti-cyclonic in Jupiter's Southern hemisphere, the rotation is counterclockwise, with a period of about 6 days. The clouds associated with the Spot appear to be about 8 km above neighboring cloud tops.

Presumably, the persistence of the Great Red Spot is related to the fact that it never comes over land, as in the case of a hurricane on Earth, and that it is driven by Jupiter's internal heat source.

It has been suggested that certain compounds of phosphorous are responsible for the reddish-brown hue, but this remains somewhat speculative. Thus, scientists understand the broad properties of this remarkable phenomenon, but not all the detailed features.