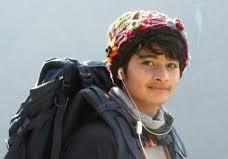 India’s Shivangi Pathak has registered her name as the youngest woman to scale the world highest peak of Mount Everest from Nepal side on 18th May 2018.

Shivangi Pathak (16-year-old girl) who hails from Hisar of Haryana in north-western India has climbed Mount Everest exploring a message that women could overcome every obstacle to achieve their goals.

Shivangi Pathak after her feat proclaimed that she was inspired by Arunima Sinha, who was the first Indian amputee to scale the nearly 29,000 ft peak.