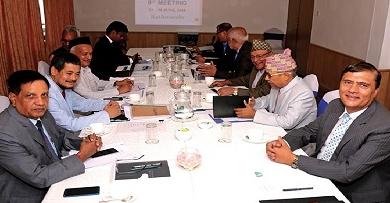 The Eminent Persons Group (EPG) 9th and final meeting on India-Nepal relations concluded in the capital city of Nepal Kathmandu.

During this two-day EPG meeting, representatives from India and Nepal deliberated upon various bilateral issues including 1950 Peace and Friendship treaty, trade, transit, and border.

The EPG was formed in January 2016 by Governments of Nepal and India for reviewing the entire gamut of Nepal-India relations and update bilateral agreements and treaties.

EPG is a joint mechanism consisting of experts and intellectuals from India and Nepal. There are four members each from Nepalese and Indian sides in the group.

EPG is mandated to review various aspects of the bilateral relations including Nepal-India Friendship Treaty 1950 and provide suggestion on ways to reshape bilateral between the two countries. During earlier meetings of EPG, Nepali side had presented facts regarding a need to review Nepal-India Peace and Friendship Treaty of 1950 so as to update is as required by time and situation.