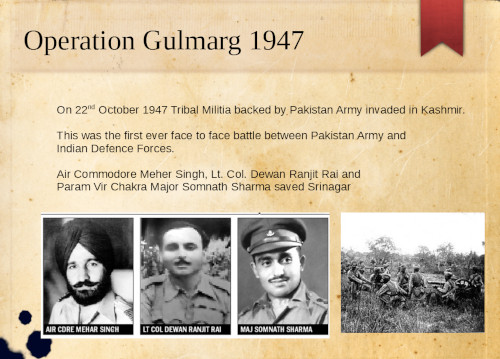 On 22 October 1947 Pakistan invaded Kashmir. The invasion, Operation Gulmarg was the result of months of planning and involvement of the topmost leaders of Pakistan including Pakistan’s then Prime Minister, Chief Minister of the Northwest Frontier, Members of the Muslim League, and Pakistan Army.

The Tribal Militia invasion (Operation Gulmarg) of Kashmir backed by the Pakistan army on 22 October 1947 unleashed a brutal series of plunder,  arson, looting, and killing.

The invasion marks the beginning of the First Indo-Pak war and sets in motion a chain of events that are still affecting the country.

On 26 October 1947, the State of Jammu and Kashmir formally acceded to India and on 27 October 1947 Indian troops were airlifted to Kashmir.

» French Revolution Effects in the History of Europe and the World