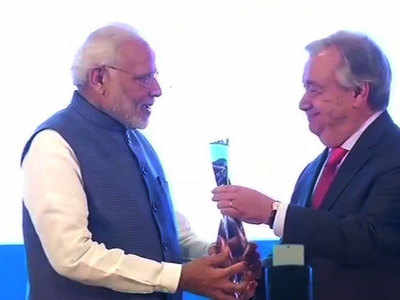 PM Narendra Modi was accorded the UN Champions of the Earth award, the highest environmental honor of the United Nations on 3rd October 2018.

The UN Champions of the Earth award was accorded by UN Secretary-General Antonio Guterres at a special PM Award ceremony in New Delhi.

UN Secretary-General Antonio Guterres on the occasion said that Prime Minister Modi is a leader who realises the issue of climate change and understands the benefits of climate action.

Antonio Guterres also added that PM Modi knows the problems and also works to solve them. He said that a green economy is a good economy and the technology is on the side of those who believe in a green economy.

The UN Champions of the Earth award was announced on September 26, 2018, on the sidelines of 73rd UN General Assembly in New York.

PM Modi has been selected in the leadership category for his pioneering work in championing the International Solar Alliance, a global partnership to scale up solar energy.

The award is also in recognition of Modi’s unprecedented pledge to eliminate all single-use plastic in India by 2022.

The prestigious awards programme recognised six of the world’s most outstanding environmental changemakers this year for their combination of bold, innovative and tireless efforts to tackle some of the most urgent environmental issues.