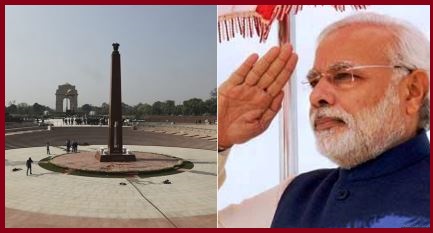 PM Modi inaugurated it by liting the flame positioned at the bottom of the stone obelisk to pay homage to the soldiers who died in the line of duty.

The National War Memorial complex, spread across 40 acres, includes a central obelisk, an eternal flame, and six bronze murals depicting famous battles fought by the Army, the Air Force, and the Indian Navy.

The National War Memorial also features names of 25,942 fallen heroes, along with their rank and regiment, that is inscribed in the 16 walls of the memorial.