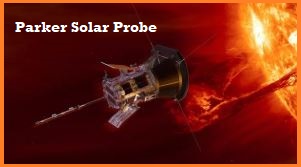 Parker Solar Probe was successfully launched on 15th August 2018 for an unprecedented seven-year-long journey to unlock mysteries of Sun’s fiery outer atmosphere and its effects on space weather.

Parker Solar Probe is named after solar astrophysicist Eugene Parker, making it first spacecraft of NASA to be named after living person.

Recently in October 2018, it has successfully completed a flyby of Venus at distance of about 2,415 kilometers during its first gravity assist from the planet. These gravity assists will help spacecraft tighten its orbit closer to Sun over course of the mission.

Its data will also be useful in improving forecasts of major eruptions on Sun and subsequent space weather events that impact technology on Earth, as well as satellites and astronauts in space.

Determining the structure and dynamics of magnetic fields at sources of solar wind.

Trace flow of energy that heats the corona and accelerates solar wind.

Explore dusty plasma near Sun and its influence on solar wind and energetic particle formation.