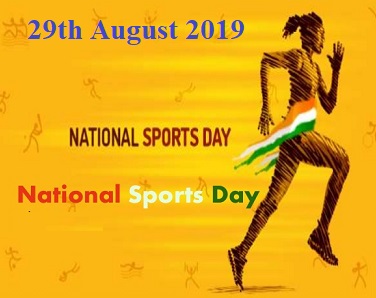 National Sports Day is celebrated every year on 29th August every year to commemorate the birth anniversary of India's legendary hockey player Dhyan Chand who was born on the same date: 29 August 1905.

National Sports Day was first declared in the year 2012.

1. Fit India Movement will be launched on 29 August on the occasion of National Sports Day 2019 by Prime Minister Modi himself at Indira Gandhi Indoor Stadium, New Delhi.

3. National Sports Development Fund (NSDF) was formed in November 1998 by the then Government to promote sports and games in India.

4. Formation of the High-level committee to address grievances of women sportspersons in 2017 on the occasion of International Women Day (8 March),

5. Empowered Steering Committee on Sports (ESC) was constituted in January 2017 for preparing a comprehensive action plan for effective participation of Indian players in the Olympic Games of 2020 (Tokyo), 2024 (Paris) and 2028 (Los Angeles).

9. Promotion of sports amongst School Students under the Samagra Shiksha Scheme

10. Target Olympic Podium Scheme (TOP) launched in May 2015 under the NSDF to support the potential medal prospects for the Olympic Games of 2016 and 2020.