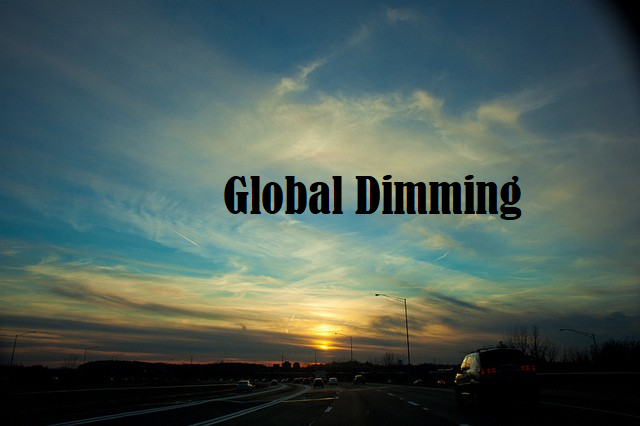 Global blurring, also called global dimming or universal altitude, refers to the gradual decrease in the amount of global direct energy value on the surface of the Earth. This indicates the fall in the amount of sunlight reaching the Earth's surface. The main reason for this is the presence of particles like sulfur particles from human activities in the environment.

The condition of cooling has also been observed as a result of global dimming, so it is believed that it can partially reduce the effect of global heating.

A region of Global Dimming

1.  Solid particles such as aerosols or liquid droplets, colloid or air or other gas or colloid are major factors of global dimming. Most aerosols in the atmosphere only disperse light from the sun, sending some bright sun energy back into space, due to which there is a cold effect on Earth's climate.

2. Sulfur dioxide or particle particles like burning fossil fuel burning by the industry and internal combustion engines enter the environments and directly absorb solar energy and radiate into space before reaching the Earth's surface.

3. When the polluted water of sulfur dioxide and sub-product of burning fossil fuel burning by the industry and internal combustion engines takes the form of vaporization (such clouds are also called 'brown cloud') then the particles present in the change in the energy of the sun Accumulate and radiate it. Which results in cooling conditions on Earth.

4.  Vapour radiation emitted from air-borne aircraft, gives the skin, which is one of the factors of global dimming or universal altitude.