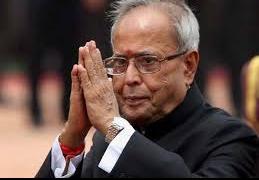 President of India, MR. Pranab Mukherjee along with DM P.Mohangandhi and Supritendent of Police Sudhit Nilakatam were present at the Durga Pooja organised by Intensive Khadi and Rural Development of India.

He recited Shlokas and offered Anjali to the Goddess and spoke to the people ‘Mission Nirmal Bangla’ and ‘Nirmal Birbhum’.

President of India encouraged people to take a pledge for cleanliness of the country.

Other 500 programmes were also held at the district

500 other programmes were held at the district pandals where local officials and leaders participated.

President also spoke about the Khadi Industry, addressing the people that there is a huge scope to expand the market but there needs to be a skilled workforce then only the industry can expand.

He also requested the people to train their younger ones as in future 50% of the population will be less than 25 years of age.