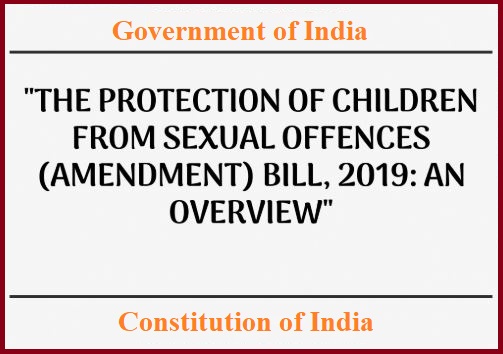 POCSO Bill 2019 amends Protection of Children from Sexual Offences Act (POCSO), 2012 which provides a legal framework to protect children from offenses such as sexual assault, sexual harassment, and pornography.

POCSO bill 2019 increases the minimum punishment for this offense from 7 years to 10 years. It also provides for with imprisonment between 20 years to life, with fine if a child is below 16 years.

POCSO bill 2019 adds two more grounds to the definition of aggravated penetrative sexual assault. These include (i) assault resulting in the death of the child and (ii) assault committed during a natural calamity or in any similar situations of violence. It also increases minimum punishment from 10 years to 20 years, and maximum punishment to the death penalty.

POCSO bill 2019 adds two more offences to the definition of aggravated sexual assault. These include (i) assault committed during natural calamity and (ii) administrating or help in administering any chemical substance or any hormone to the child for the purpose of attaining early sexual maturity.

POCSO bill 2019 defines child pornography as any visual depiction of sexually explicit conduct that involves child such as photographs, video, digital or even computer-generated image indistinguishable from the actual child. It also enhances punishments for certain offences related to child pornography.