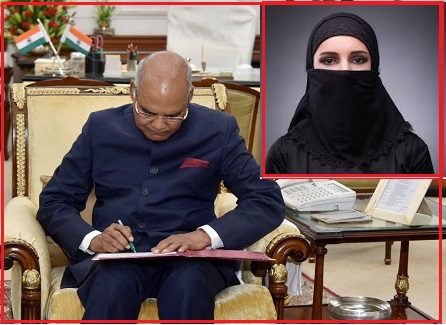 President Ram Nath Kovind on 19th September 2018 signed the Ordinance that meant for banning the practice of Instant Triple Talaq.

The ordinance was cleared by the Union Cabinet earlier on the same day itself. The ordinance makes instant triple talaq a punishable offense.

The ordinance has similar provisions as mentioned in original the Muslim Women (Protection of Rights on Marriage) Bill 2017, which was cleared by the Lok Sabha in December 2017. However, the bill was stuck in the Rajya Sabha.

It faced a stiff resistance in the Rajya Sabha where several opposition lawmakers argued over the criminal provisions in the draft law.

In witnessing of the growing opposition, the Government on 9th August 2018, approved three amendments in the instant triple talaq bill, making it permissible for a magistrate to give bail for the offence.

Among Muslims, marriage is treated as a social contract and the Muslim Sharia (Islamic Law) provides the ways to terminate the marriage in the form of talaq.

The term 'talaq' means 'freeing or undoing the knot', referring to a divorce.

Triple talaq is basically a process of Divorce wherein the husband pronounces three talaqs upon wife, one in each menstrual cycle, only to ensure that she is not pregnant