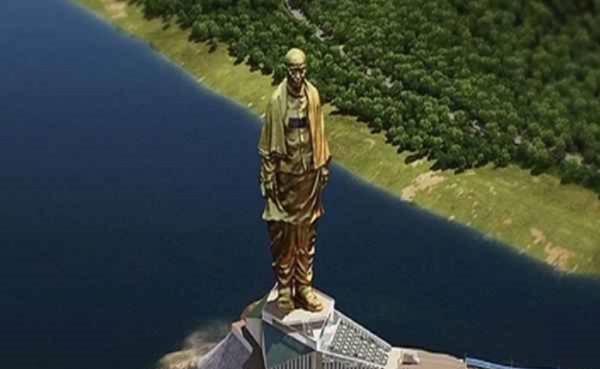 As the world's tallest statue, Sardar Vallabhbhai Patel's Statue of Unity was unveiled by Prime Minister Narendra Modi in Gujarat on October 31, 2018.

This function was organized on Sardar Patel's birth anniversary on October 31.

Sardar Patel's statue of 182 meters has been described as the world's tallest statue.

Fly posted by Indian Air Force to unveil statue In addition, patriotic songs were sung by the Navy and the IAF band.

The 153 meters tall Buddha statue of China-based Spring Temple was the highest record of being the statue, but the statue of Sardar Vallabh Bhai Patel has now left the idol installed in China in second place.

Statue maker Larsen & Toubro claimed that the Statue of Unity is the world's tallest statue and only 33 months of records have been prepared in less time.

The image itself is unique. Its foot height is 80 feet, height of hand 70 feet, shoulder height 140 feet, and face height 70 feet.

The cost of Sardar Patel's worth was about Rs 2,989 crore. According to the company, except for the laying of bronze, the rest is completed in the country itself.

This statue is located at a distance of 3.5 kilometres from the Sardar Sarovar dam on the river Narmada.