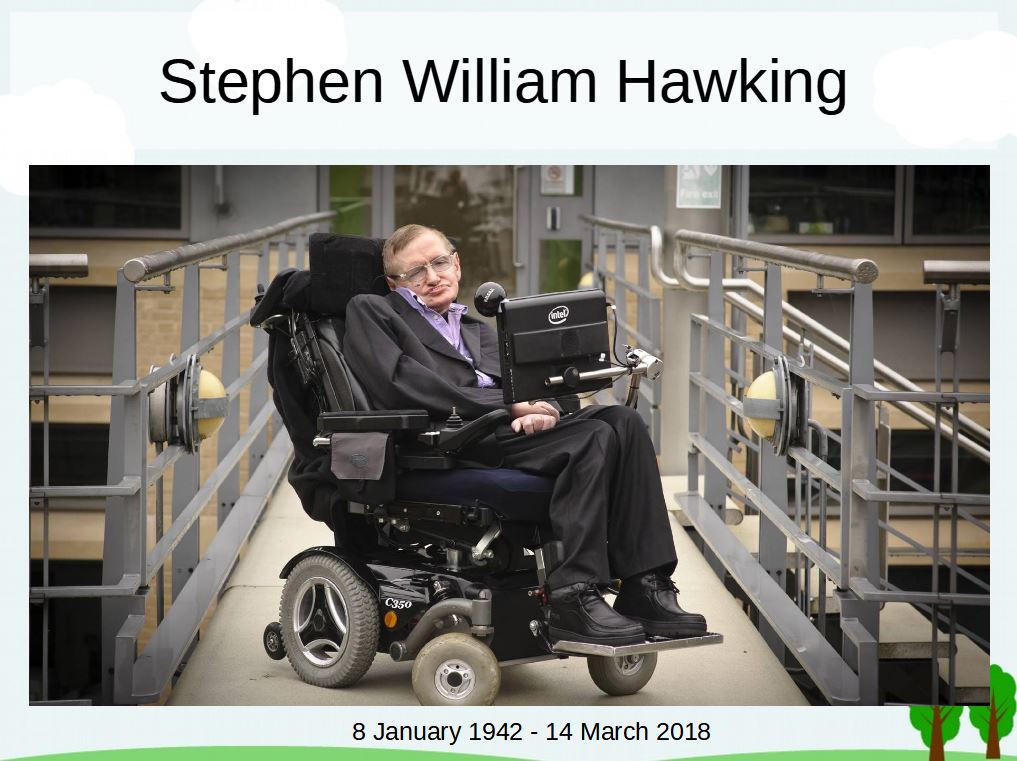 Stephen William Hawking, a British cosmologist, was born in England on Jan. 8, 1942, 300 years after the astronomer Galileo Galilei died. Despite his father's advice to focus on medicine, he went to University College, Oxford, and studied physics. Hawking then moved to Cambridge to study cosmology, or the study of the entire cosmos.

Stephen William Hawking CH CBE FRS FRSA was an English theoretical physicist, cosmologist, and author who served as director of research at the University of Cambridge's Centre for Theoretical Cosmology at the time of his death.

Hawking was diagnosed with motor neuron disease, often known as Lou Gehrig's illness or amyotrophic lateral sclerosis, in early 1963, just shy of his 21st birthday (ALS). He was only supposed to live for two years. Although completing his degree seemed unlikely, Hawking bucked the odds. In 1966, he received his PhD (Hawking's PhD thesis was made available online in 2017), and in the decades thereafter, he has continued to build new paths into the comprehension of the universe.

Hawking met Jane Wilde shortly before his diagnosis, and the two married in 1965. Before divorcing, the couple had three children. Hawking remarried in 1995, but the marriage ended in divorce in 2006.

After graduating, Hawking stayed in Cambridge as a research fellow and then a professional fellow. He was elected to the Royal Society, an international scientific society, in 1974. He was named Lucasian Professor of Mathematics at Cambridge in 1979, the world's most prestigious academic position (the second holder was Sir Isaac Newton, also a member of the Royal Society).

Hawking spent much of his career studying the fundamental laws that govern the cosmos. He postulated that, because the universe has a beginning (the Big Bang), it will very certainly have an end. He established, in collaboration with fellow cosmologist Roger Penrose, that Albert Einstein's General Theory of Relativity indicates that space and time began at the beginning of the universe and ends within black holes, implying that Einstein's theory and quantum theory must be combined.

Hawking also discovered that black holes aren't completely dark, but emit radiation, using the two theories combined. He predicted that black holes as small as protons will form following the Big Bang, influenced by both general relativity and quantum physics.

In 2014, Hawking revised his theory, even writing that " there are no black holes" — at least, in the way that cosmologists traditionally understand them. His theory removed the existence of an "event horizon," the point where nothing can escape. Instead, he proposed that there would be an "apparent horizon" that would alter according to quantum changes within the black hole. But the theory has proven to be controversial.

Hawking also claimed that, like the Earth, the cosmos has no boundaries. Despite the fact that the planet is finite, one can travel around it (and across the universe) indefinitely without ever coming to a "end."

Hawking was a well-known author. "A Brief History of Time" (10th anniversary edition: Bantam, 1998) was his debut book, and it was an international bestseller when it was initially released in 1988. Hawking's goal was to communicate to the layperson questions concerning the universe's birth and death.

He and his daughter, Lucy Hawking, also wrote a fictional series of books on the origins of the cosmos for middle school students, including "George and the Big Bang" (Simon & Schuster, 2012).

Hawking had multiple television appearances, including a cameo on "Star Trek: The Next Generation" as a hologram of himself and a cameo on "The Big Bang Theory." PBS aired "Stephen Hawking's Universe," an educational miniseries that delves into the cosmologist's beliefs.