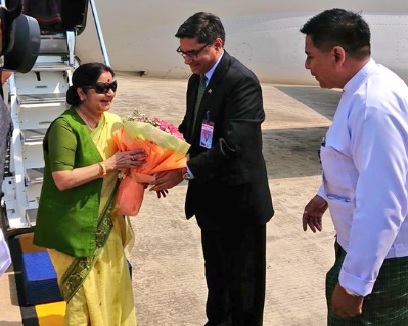 Sushma Swaraj in her visit is expected to hold discussions with Myanmar's top leadership on key bilateral and regional issues, including the situation in the Rakhine state from where thousands of Rohingya Muslims had fled following violence in the year 2017.

Indian Foreign Minister, Sushma Swaraj as a key partner in Act East Policy! (EAM) called on the President of Myanmar, U Win Myint in her first engagement in Myanmar.

Myanmar is one of India's strategic neighbors and it shares a 1,640 km border with a number of northeastern states, including militancy-hit Nagaland and Manipur.

Rohingya are the stateless ethnic minorities (mostly Muslim) from Rakhine province of Buddhist-majority Myanmar, who are forced to leave their country due to communal violence and repeated military operations.

According to UN report, over 6 lakh Rohingya Muslims have fled Myanmar’s violence-hit Rakhine state into Bangladesh since August 2017 when the fresh wave of violence had erupted in this province, triggering one of the world's worst refugee crises

Following this attack, Myanmar’s military had launched a violent crackdown on insurgents from Muslim Rohingya population which led to mass exodus of Rohingya Muslims into neighboring Bangladesh