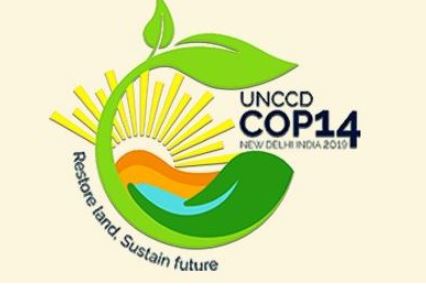 India is hosting 14th session of (UNCCDC COP14) Conference of the Parties (COP) to the United Nations Convention to Combat Desertification (UNCCD).

The UNCCDC COP14 is scheduled to take place from 2nd September to 13th September 2019 at New Delhi.

Desertification: Degradation of land in arid, semi-arid and dry sub-humid areas (Not the natural expansion of existing deserts)

Land Degradation: Deterioration in the quality of land (its topsoil caused by excessive or inappropriate exploitation)

India to look after 3 things:

1. Restore 50 lakh hectares of degraded land in 10 years
2. Provisions of the New Delhi declaration to be adopted at the end of the conference
3. Center of Excellence to be established at Forest Research Institute

The Parties adopted a new strategic framework for implementing the Convention for the period of 2018-2030. It was adopted during the 13th Meeting of the Conference of the Parties (COP13) held in China.

Conference of Parties (COP) is the supreme decision-making body of UNCCD and 197 country parties (including EU) are constituent members of this body. Its main function is to review reports submitted by the Parties and make recommendations, adopt new annexes to the Convention.

United Nations Convention to Combat Desertification (UNCCD) was established in 1994.

UNCCD addresses semi-arid, arid and dry sub-humid areas, known as the dry-lands, where some of the most vulnerable ecosystems and peoples can be found.

» 23 August: International Day for the Remembrance of the Slave Trade and its Abolition

» 21 August: International Day of Remembrance and Tribute to the Victims of Terrorism