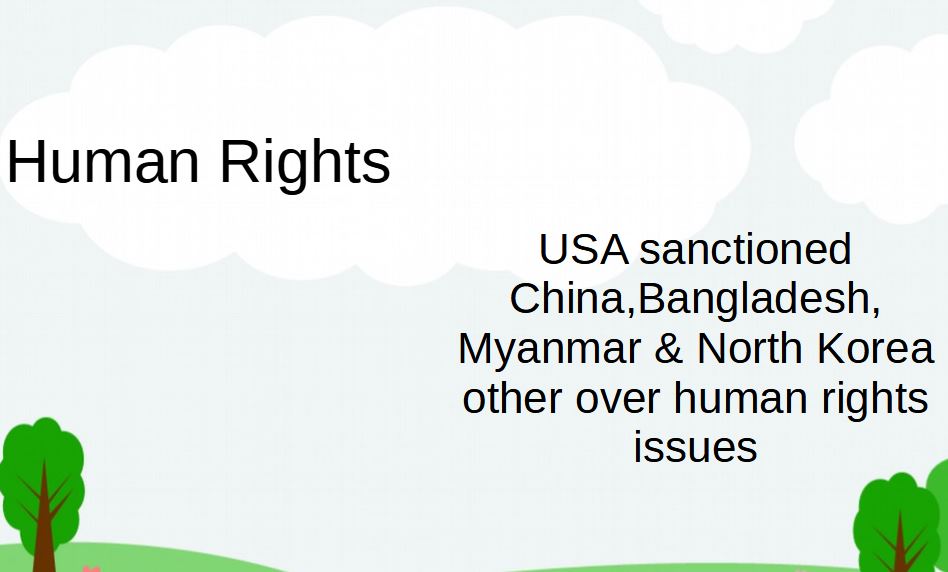 On Friday 11th December 2021, the US imposed broad human rights penalties on dozens of people and entities linked to China, Myanmar, North Korea, and Bangladesh, as well as adding SenseTime Group, a Chinese artificial intelligence startup, to an investment blacklist.

In observance of Human Rights Day, Canada and the United Kingdom joined the United States in imposing sanctions related to human rights violations in Myanmar, while the United States also imposed the first new sanctions on North Korea under President Joe Biden's administration, targeting Myanmar military entities, among others.

In a statement, Deputy Treasury Secretary Wally Adeyemo stated, "Our measures today, particularly those in collaboration with the United Kingdom and Canada, send a message that democracies around the world will act against those who misuse the state's power to inflict pain and repression."

The Chinese embassy in Washington called the move "serious intervention in China's domestic affairs" and a "serious violation of basic international rules."

Liu Pengyu, a spokeswoman for the Chinese Embassy, said the decision will do "severe harm to China-US relations" and urged Washington to reverse it.

Requests for response from the North Korean mission at the United Nations, as well as the Myanmar and Bangladesh embassies in Washington, were not immediately returned.

The penalties are the most recent in a series of steps timed to coincide with Biden's two-day virtual Summit for Democracy, where he outlined initiatives to strengthen democracy throughout the world and support for pro-democracy legislation in the US.

On 10 December 2021 Friday, Biden claimed that pledges made by some of the summit's more than 100 international leaders would oppose increasing autocracy, battle corruption, and promote human rights around the world.

In a speech at the summit's conclusion, he said, "This will help sow fertile ground for democracy to grow all across the world.

On Friday, the Treasury Department added SenseTime to a list of "Chinese military-industrial complex corporations," accusing the company of developing face recognition technologies that may determine a target's ethnicity, with a particular focus on ethnic Uyghurs.

As a result, US investors will be barred from investing in the company. In an initial public offering, SenseTime is on the verge of selling 1.5 billion shares (IPO). The company began addressing the status of the planned $767 million sale with Hong Kong's stock exchange after learning of the Treasury limitations earlier this week, according to two people with direct knowledge of the matter.

In a statement released on Saturday, SenseTime said it "strongly opposes the designation and allegations that have been made in connection with it," calling the allegations "unfounded."

China denies human rights violations in Xinjiang, but the US government and several human rights organisations think Beijing is committing genocide there.

Doomsday Clock moved 2 minutes to midnight amid escalation i...

The US President Donald Trump married three times and has fi...

Donald Trump as President of America to take $1 salary, no leave

The elected President of America Donald Trump to take only $...

Donald Trump elected as US President on 9 November 2016