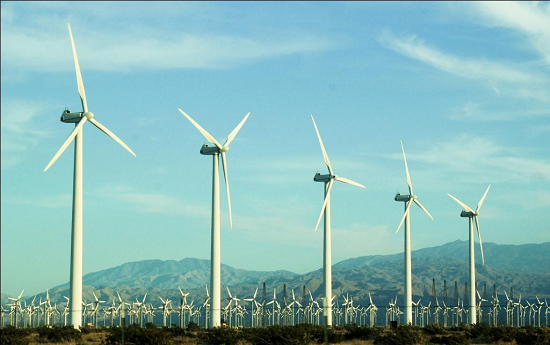 Wind power is a renewable energy source where the wind will turn fans and in turn, the fans turn a turbine which turns kinetic energy into electricity.

Wind power, a form of energy conversion in which turbines convert the kinetic energy of wind into mechanical or electrical energy that can be used for power.

Wind power is considered a renewable energy source. Historically, wind power in the form of windmills has been used for centuries for such tasks as grinding grain and pumping water.

The largest turbines can produce 4.8–9.5 megawatts of power, have a rotor diameter that may extend more than 162 meters and are attached to towers approaching 240 meters tall.

The most common types of wind turbines (which produce up to 1.8 megawatts) are much smaller.

they have a blade length of approximately 40 meters and are attached to towers roughly 80 meters tall.

Smaller turbines can be used to provide power to individual homes.

Wind farms are areas where a number of wind turbines are grouped together, providing a larger total energy source.