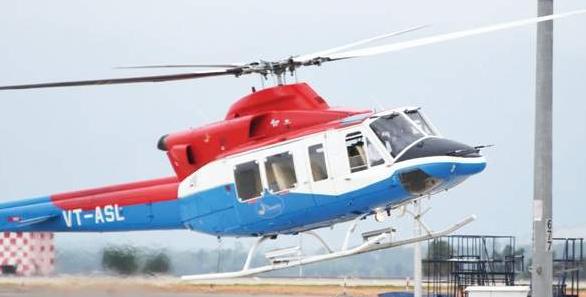 The debut HeliTaxi service trip was made by a Bell 407 helicopter, between Electronic City and Kempegowda International Airport (KIA).

The HeliTaxi service will reduce the traveling time from 2 hours by road to 12-15 minutes by air.

The first HeliTaxi flight successfully took off from Electronic City at 3.35 pm from a Thumby Aviation helipad in Electronic City delivering its first 3 passengers to KIA in just 15 minutes of travel.

The Bengaluru International Airport Limited (BIAL), in Devanahalli, had tied up with helicopter service provider Thumby Aviation Pvt Ltd to ferry air passengers to and from the Bengaluru city.

According to Thumby Chairman Group Captain K.N.G. Nair, at present, the HeliTaxi service is being operated between KIA and Electronic City only, timings from 6.30 a.m. to 9.30 a.m. and 3.15 p.m. to 6 p.m through a Bell 407 helicopter that can accommodate six passengers and a pilot.

K.N.G. Nair informed that the fare is fixed at Rs 4,130 per seat, including GST. It includes pick up from airport terminal to the helipad and allows carrying 15 kg luggage, but an extra charge will be implied for additional luggage.

K.N.G. Nair also informed that more HeliTaxi service will initiate more helicopters in future and will also extend its pick & drop points. The HAL airport will also be added in the next few weeks.

People can easily book their seats through a mobile app named 'Heli Taxii'.

Bengaluru Airport to become first in Asia to use face recogn...