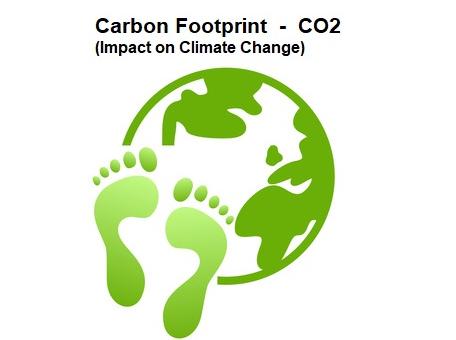 Carbon footprint is a measure of the carbon emitted into the atmosphere by undertaking an activity or manufacturing a product.

if we put 1 gallon of petrol in my car and drive 50 miles till it is used up, the chemical carbon in the petrol (petrol is carbon combined with hydrogen - hydrocarbons) goes from my tank into the air, along with some water vapour.  That amount of carbon left lingering in the atmosphere is the "footprint" of my 50-mile journey.

The carbon in the original gallon of gasoline weighs 5.5 pounds

Combustion of the gasoline inside the engine releases heat, and the pressure of that drives the motor.  Combustion means burning, but it happens really fast like as an explosion because all the ingredients are all right there at the same moment.

This produces 19.5 lb of gaseous carbon dioxide because 14lbs of air combine with that carbon in the explosion, releasing heat and expanding to push your car pistons.

"Carbon Footprint"  to mean the Carbon Dioxide Footprint,  because the global warming effect of carbon dioxide happens in the air and the ocean acidification effect happens as carbon dioxide is dissolved in the water of the oceans.