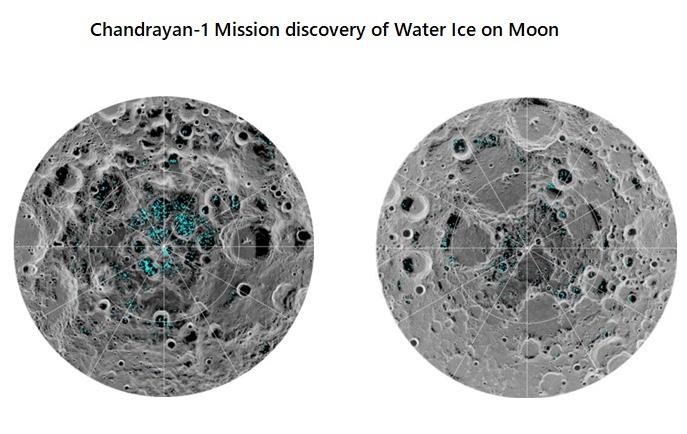 The name Chandrayaan means Moon Craft in ancient Sanskrit according to NASA. The Chandrayaan-1 spacecraft was based on an Indian meteorological satellite called Kalpansat.

Chandrayaan-1 was India's first mission to the moon. It operated for almost a year (between October 2008 and August 2009). The lunar orbiter is best known for helping to discover evidence of water molecules on the moon.

The Moon has no atmosphere, any substance on the lunar surface is exposed directly to vacuum.

For water ice, this means it will rapidly sublime directly into water vapour and escape into space, as the Moon's low gravity cannot hold gas for any appreciable time

The Clementine imaging experiment showed that such permanently shadowed areas do exist in the bottom of deep craters near the Moon's south pole.

The permanently shadowed area near the north pole appears on Clementine images to be considerably less.

Chandrayaan-1 also carried a 34 kg Moon Impact Probe (MIP) equipped with a video camera, a radar altimeter, and a mass spectrometer. The side panels of the box-like probe were painted with the Indian flag.

The Indian Space Research Organization announced on 31 August that the Chandrayaan 1 mission has been officially terminated after contact was lost abruptly at 20:00 UT on 28 August.