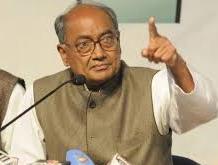 Congress leader Digvijay Singh condemned Narendra Modi by saying him a ‘warmonger’ after the surgical strikes which happened on 29th September across LOC in Pakistan occupied Kashmir (POK).

These surgical strikes were done when Pakistan made a terror attack at the army camp of Uri where 19 soldiers were killed.

He stated that Narendra Modi is responsible for creating a war like situation with its neighbours Pakistan and he did so just to win the next elections.

The General Secretary of Congress also stated that by doing war he is strengthening ISI but weakening the political structure of the country.

He also requested the government to please stop doing this war for the sake of their children and families and come to the negotiating tables.

» Jammu-Kashmir to deploy special forces in crowded area for peace