The Indian National Congress: About, Details, History,list of the president 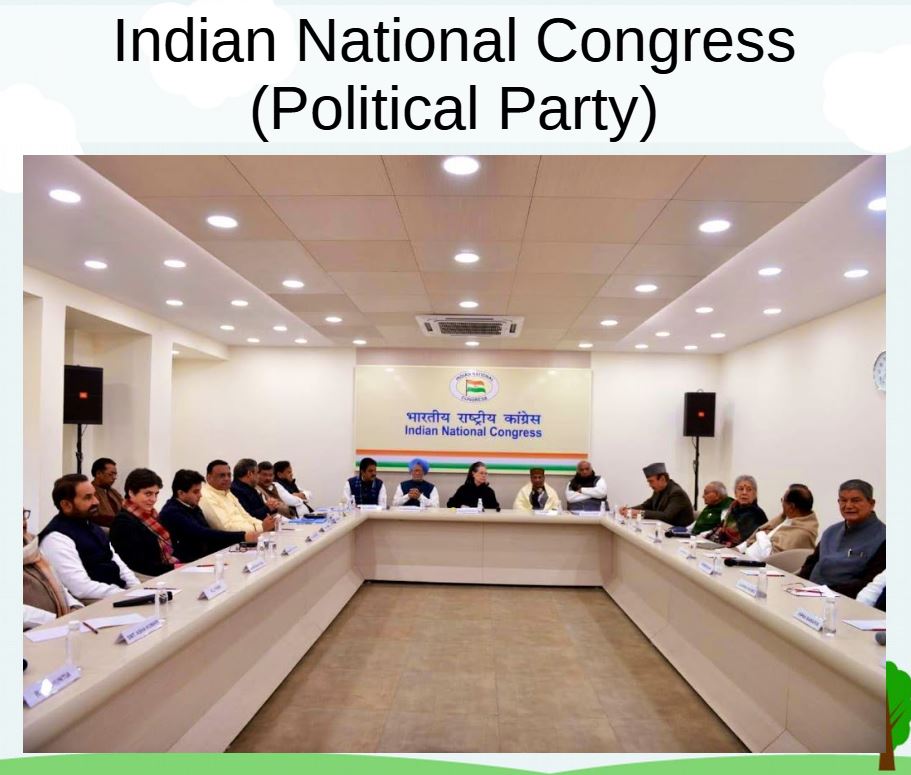 The Indian National Congress (INC): About, Details, History, list of the president

The Indian National Congress is a broad-based political party in India. It was the first modern nationalist movement to develop in the British Empire in Asia and Africa, having been founded in 1885.

In order to create a platform for civil and political debate among educated Indians, retired British Indian Civil Service (ICS) officer Allan Octavian Hume created the Indian National Congress (A political party of India (British India to Free India)). Control of India was passed from the East India Company to the British Empire after the Indian Rebellion of 1857. The British Raj, or simply the Raj, attempted to justify and defend its rule over India by enlisting the help of English-educated Indians, who were more familiar with and sympathetic to British culture and political thought. Ironically, sponsorship from British authorities and a burgeoning elite of Indians and Anglo-Indians educated in the English language-based British tradition were two of the reasons the Congress expanded and thrived, notably during the 19th century era of indisputable British domination or hegemony.

In May 1885, Hume obtained the viceroy's permission to establish a "Indian National Union," which would be associated with the government and serve as a forum for Indian public opinion. On October 12, Hume and a group of educated Indians released "An Appeal from the People of India to the Electors of Great Britain and Ireland," which urged British voters to vote for candidates sympathetic to Indian issues in the 1885 British general election. Opposition to taxing India to fund British wars in Afghanistan and advocacy for legislative reform in India were among them.However, the appeal was unsuccessful, and many Indians saw it as "a nasty shock, but a true awareness that they would have to fight their fights alone."

The Indian National Congress was founded on December 28, 1885, at Gokuldas Tejpal Sanskrit College in Bombay, with 72 delegates in attendance.

The president of the Indian National Congress (INC), one of India's most powerful political parties, is the highest leadership of the INC.The president is elected by an electoral college made up of members of the Pradesh Congress Committees as well as members of the All India Congress Committee (AICC). In the event of an emergency, such as the death or resignation of the president chosen as above, the most senior General Secretary assumes the president's usual tasks until the Working Committee names a provisional president while the AICC elects a regular president.The party's president has successfully served as the party's national leader, head of the party's organisation, chairman of the Working Committee, top spokesman, and chair of all major Congress committees.

Womesh Chunder Bonnerjee was the first president of the party when it was founded in December 1885. From 1885 until 1933, the presidency was limited to a single year. There was no such fixed term for the president after 1933. Even though Jawaharlal Nehru was always the leader of the Legislative Party, he rarely held the presidency of the INC during his government. Despite having a structure, Indira Gandhi's Congress did not hold any organisational elections beyond 1978. In 1978, Gandhi broke away from the INC and founded the Congress (I), a new opposition party that the national election commission proclaimed to be the authentic Indian National Congress for the general election of 1984. After the Congress was formed, Gandhi established the practise of having the same individual serve as President and Prime Minister of India (I).Rajiv Gandhi and P. V. Narasimha Rao, her successors, followed in her footsteps.Nonetheless, when the Congress was re-elected in 2004, Manmohan Singh became the first Prime Minister who was not also the party's president since the practise of the president holding both offices was established.

Since the founding of the Indian National Congress, 61 persons have served as president.

Sonia Gandhi is the party's longest-serving president, having led the party for more than two decades, from 1998 to 2017 and since 2019.