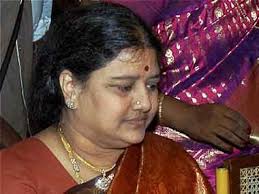 V K Sasikala Natarajan is appointed as the General Secretary of AIADMK party at the party’s General Council meeting on Thursday.

The appointment came after passing the resolution in the meeting and will soon take the charge.

According to the resolution, the general council adopts Chinnamma CK Sasikala as the general secretary till such time she is formally elected to that post with party rule 20, Clause 2.

After J Jayalalitha’s demise the post was vacant and the party members called on the meeting to appoint new general secretary.