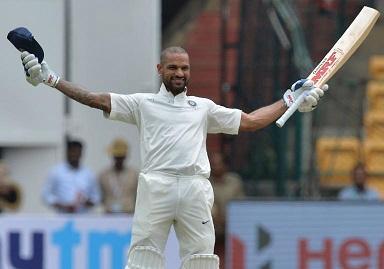 Indian opener Shikhar Dhawan became the first Indian opener to have scored a century before lunch on the first day of the one-off test against Afghanistan at M Chinnaswamy Stadium in Bengaluru.

Shikhar Dhawan achieved the feat by scoring 107 runs off just 82 balls before lunch.

The first batsman to do so was Australia’s V.T. Trumper against England in 1902.

Out of six batsmen, four are from Australia, one from Pakistan and one from India.

Shikhar Dhawan (32 Years old) who hails from Delhi, was also awarded as the 'Man of the Match' award after the charismatic win over Afghanistan.

India crushes Afghanistan team by an innings and 262 runs in debut Test.