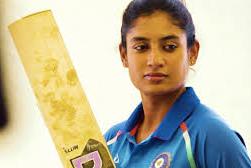 Mithali Raj (35 years) now has 2,015 runs in 75 matches. Indian men's team captain Virat Kohli with 1,983 runs is the next on the list, followed by Rohit Sharma and Suresh Raina.

Mithali Raj has also became the seventh woman cricketer and the only Indian to achieve the T20I feat.

Martin Guptill and Brendon McCullum from New Zealand are the only two male cricketers to have crossed the 2000 mark in T20 Internationals, with 2271 runs and 2140 runs respectively.