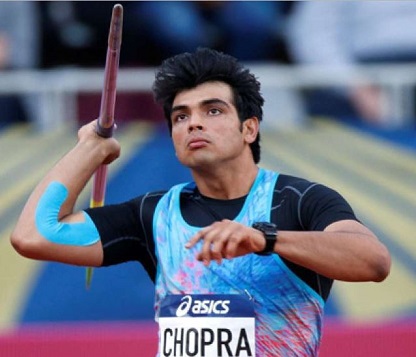 Neeraj Chopra achieved the feat with a throw of 85.17m, which was way ahead of his competitors, including Moldova's Andrian Mardare (81.48m) and Lithuania's Edis Matusevicius (79.31m), who took the 'Silver' and 'Bronze' medals respectively.

The winning distance covered by Neeraj Chopra at the Sotteville Athletics meet, was, however, less than what he had achieved to win the historic CWG gold.

The competitive field also included the 2012 London Olympics gold-medallist Keshorn Walcott of Trinidad and Tobago, who could only manage to throw78.26m, finishing at the fifth position.

Neeraj Chopra ( 20-year-old) who hails from Panipat, Haryana had first come to limelight when he won the gold medal in the 2016 World Junior Championship with a record throw of 86.48m. However, Later, he failed to qualify for the finals at the Rio Olympics in 2016.

Earlier, in April 2018, Neeraj Chopra made the headlines yet again by winning the gold medal at the Commonwealth Games in Gold Coast, Australia. There he had improved on his season’s best with an effort of 86.47m in Gold Coast to become the country's first javelin-thrower to win a CWG gold.

Neeraj Chopra in May 2018, he shattered his own national record by clearing a distance of 87.43m at the Doha Diamond League, where he finished fourth.

Neeraj Chopra's next big test will be at the Asian Games, which is scheduled to be held from 18th August 2018 to 2nd September 2018, in Indonesia.