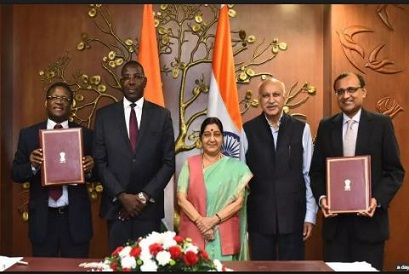 India and Niger have signed a Memorandum of Understanding (MoU) for the establishment of the Mahatma Gandhi International Convention Centre in Niamey, Niger.

The MoU was signed during Mr. Saidil Mohamed’s visit in India.

The Mahatma Gandhi International Convention Centre is being established in the context of the African Union (AU) Summit that Niger is to host in 2019.

India has offered to establish Mahatma Gandhi Convention Centres in more than 20 countries in Africa, of which Centres in 9 countries are being taken up in the immediate phase.

India and Niger bilateral relations have expanded significantly since the opening of the Indian Resident Diplomatic Mission in Niamey in 2009. India has provided Niger, lines of credit worth USD 96.54 million for projects in transport, electrification, solar energy, and potable drinking water.