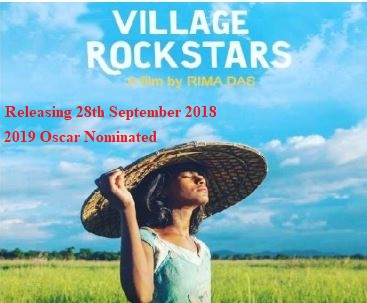 Village Rockstars film narrate the story of 10-year-old Dhunu, a young girl from a remote village in Assam, who dreams of owning a guitar and forming a rock band despite the awful financial situation at home.

Village Rockstars film was shot in director Rima Das’ native village of Chhaygaon and most of the cast members are non-actors from the village, including the leading character Dhunu which is played by Das’ niece Bhanita Das.

Rima Das acts as a one-woman executer for the film; she is the writer, director, cinematographer, editor and the producer of the film. She took over 3 years to script Village Rockstars, which was then shot over a period of 130 days.

Village Rockstars film is scheduled for a pan-India release on 28th September 2018.

Village Rockstars film has traveled to more than 70 film festivals around the world.

Oscar nominations are basically announced in the month of January every year. In 2017, Amit Masurkar’s Newton was India’s official entry but failed to make it to the final nomination list.

The only three Indian films that have made it to the top five nominees for Best Foreign Language Film are Mehboob Khan’s Mother India (1957), Mira Nair’s Salaam Bombay! (1988); and Ashutosh Gowariker’s Lagaan (2001).