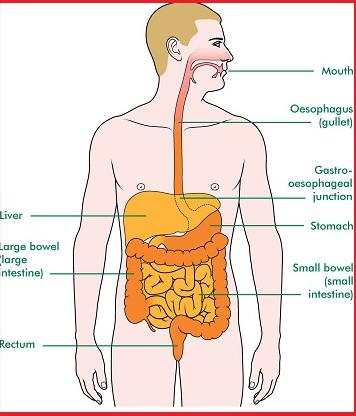 Oesophagus or Esophagus is a long muscular tube part of a digestive system that connects mouth to stomach to actively pass food.

Oesophagus s around 25cm long in adults. After food is swallowed walls of oesophagus squeeze together (contract) and moves food down to the stomach. The area where the oesophagus joins stomach is called gastro-oesophageal junction.

Mucosa – inner layer, which is moist to help food pass smoothly into the stomach.

Muscularis – It is a muscle layer, which pushes food down to the stomach.

Adventitia – It is the outer layer, which attaches oesophagus to nearby parts of the body.

Oesophagus can be affected by congenital diseases, such as oesophageal atresia, a medical condition causing narrowing or malformation of the oesophagus due to genetic mutations.

Other diseases related to it include oesophageal cancer, gastroesophageal reflux disease (GERD), or rare ailment called achalasia, a disease affecting muscles of lower oesophagus that prevents contraction of organ and passage of food.

Science: Effects of Particulate Matter Some other diseases t...

Human digestive system, the digestion of food, and transform...

Biology: Double Circulation of blood, parts, mechanism in the body

Double Circulation of the Blood in an organism The deoxygen...