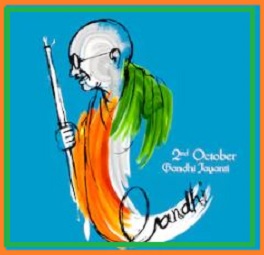 Gandhi Jayanti is celebrated in India on the 2nd of October every year. It is also observed as International Day of Non-violence was established by the UN General Assembly (UNGA) by passing the resolution in 2007 in an effort to spread the Gandhi's message of non-violence.

Mahatma Gandhi full name 'Mohandas Karamchand Gandhi', was a great leader born in the year 1869 at Porbandar in Gujarat. He was also known as the "Father of the Nation.” He was assassinated on 30th January 1948 in New Delhi.

Mahatma Gandhi is remembered for his unforgettable contribution to India's struggle for freedom. His aim was to build a new society that practices nonviolent and honest behavior. Its members should be treated equally whatever their gender, religion, color or caste.

Gandhi Jayanti is celebrated as the national holiday but since the tenure of PM Narendra Modi has urged Gandhi Jayanti will not be a holiday for government staff for the first time in the history of India, Every government personnel are present to for oath of ‘Swachch Shapath.’

On Gandhi Jayanti, prayer meetings are held to pay tribute, in front of the statue at the Raj Ghat New Delhi. President and Prime Minister of India are present during the prayer at the memorial of Mahatma Gandhi where he was cremated. His most preferred and devotional song Raghupati Raghava Raja Ram is sung in the memory of him.

India will celebrate & organise 'Gandhi March' in the Ne...