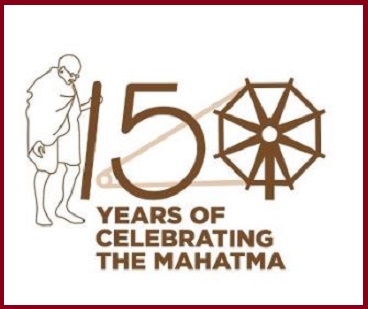 The Gandhi Jayanti was celebrated on 02 October 2018 which marks the beginning of 150th years birth anniversary of Mahatma Gandhi 'Father of the Nation'.

Since 2nd October 2018, On this occasion, various programs were held across India to commemorate, 'Gandhi, Jayanti'. The event started with 'Swachhta Hi Sewa’.

Also in 2019, Modi government has lined up a string of events across the globe to commemorate the 150th birth anniversary year of Mahatma Gandhi, they are as follows:-

About 150 globally eminent personalities have been identified, including political leaders, journalists, artists, and business leaders to compile a ‘Gandhi Anthology’. They have been asked to write what Gandhi means to them in the 21st century.

Short talks on Gandhi, named ‘Satya Vaarta’, will also be organized by identifying people who are influenced by Gandhi and upload inspirational talks with them online.

Translations of collected works of Gandhi will also be presented to universities abroad and each foreign mission will be doing talk events in 12 schools till 2nd October 2019 and hand over books on Gandhi in various languages.

All Indian missions and posts will also plant 150 trees each on 5th June 2019, on World Environment Day (WED).

Modi government has also planned to prepare a documentary on all these celebrations held or will be held.