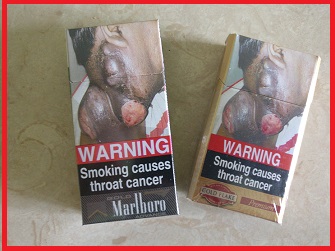 The ranking of the countries was in terms of the largest pictorial warning on cigarette packs. In India, 85% of both sides of cigarette packets are covered with warnings.

In 2018 report, Timor-Leste has the largest warnings on cigarette packages in the world with 92.5% on front and back, followed by Nepal and Vanuatu with 90% and New Zealand at fourth with 87.5%. India secured the fifth rank jointly with Hong Kong and Thailand for 85% warnings.

It was the sixth Canadian Cancer Society international report on cigarette package health warnings. Previous reports were published in 2008, 2010, 2012, 2014 and 2016. It was released in Geneva at the 8th session of Conference of Parties to WHO Framework Convention on Tobacco Control (FCTC)

The current regulation of pictorial warnings in India on both sides of packages of cigarettes, bidis and all forms of chewing tobacco products came into effect in April 2016 upon direction of Rajasthan High Court and subsequently Supreme Court. India has demonstrated global leadership by implementing quit-line number on all tobacco packages.

Tamil Nadu bans the sale of e-cigarettes with immediate effe...

Government of India notified the Indian States & UTs to ...