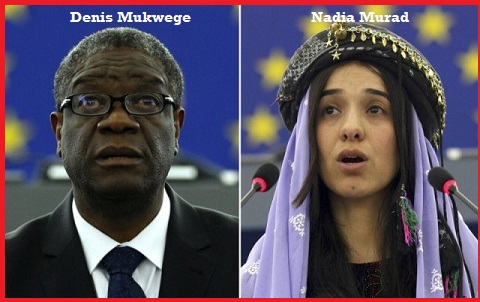 Congolese physician doctor Denis Mukwege and Yazidi campaigner Nadia Murad have been accorded with the Nobel Peace Prize-2018, by the Norwegian Nobel Committee on 5th October 2018.

Denis Mukwege and Nadia Murad were awarded the Nobel Peace Prize 2018 for their contribution to ending the use of sexual violence as a weapon of war and armed conflict.

Denis Mukwege and Nadia Murad made important efforts to combat war crimes by putting their personal security at risk aiming justice for the victims.

They both have helped to give greater visibility to war-time sexual violence so that the perpetrators can be held accountable for their actions.

Dr. Mukwege, a 63-year-old gynecologist has been associated with the treatment of various sexual assault victims in the Democratic Republic of Congo. He has devoted his entire life to defending the victims and seeking justice for them.

Ms. Nadia Murad, 25-years-old is a member of the Yazidi minority in northern Iraq. She herself became a victim of war crimes. She was made the first UN goodwill ambassador for survivors of human trafficking.

Nadia Murad speaks of the abuses perpetrated against her and others. She is brave to recount her own sufferings and speaking up on behalf of other.

Norwegian Nobel Committee to award the Nobel Peace Prize for...