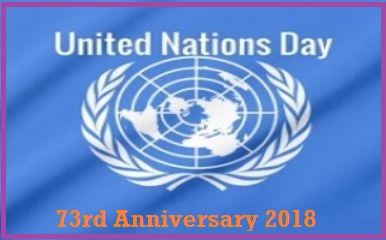 The United Nations Day is celebrated every year on 24th October to mark its anniversary of the entry into force of UN Charter in 1945. ‎This year in 2018 UN marks its 73rd anniversary.

The UN entered into force on 24 October 1945 after it was enacted by the original five permanent members of the Security Council-China, France, Union of Soviet Socialist Republics (now Russia), United Kingdom, and the United States and the majority of the other signatories.

Since then, United Nations officially came into existence on 24th October is celebrated as UN Day. On this day all member states of UN contribute finances to its operation to help further its goals.

At present, UN has become world’s only truly universal global organization and is a foremost forum to address issues that transcend national boundaries and cannot be resolved by any one country acting alone.

The UN's major role is to maintain world peace, human rights, promote social and economic development and provide aid around the world in cases of famine, natural disaster, and armed conflict.

The United Nations is a successor of ineffective League of Nations and was established in 1945 after World War II in order to prevent another such conflict.

LoN was founded in January, 1920 as a result of Paris Peace Conference that ended World War I.

LoN was the first international organisation whose principal mission was to maintain world peace. ‎But the onset of World War II, demonstrated that LoN failed in its primary purpose of preventing another world war.

United Nation (UN) Day observed across the world on 24 October

United Nation (UN) Day observed across the world on 24 ...

» United Nation (UN) Day observed across the world on 24 October